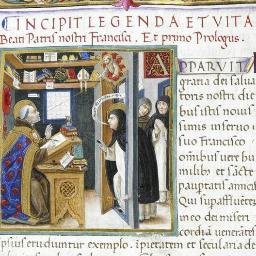 To this end, it offers graduate courses of Specialization in Medieval Studies, at Rome and via video-conferencing to students throughout the world of the following kinds:

a) Preparatory courses in Latin, Philosophy, History and Medieval Studies, aimed at orientating the students for the three principle cycles of study.
b) Baccalaureatus Philosophicus: 2 year program of studies on Medieval Philosophy focusing on the Scholastic and pre-Scholastic authorities and texts in Philosophy.
c) Baccalaureatus Biblicus:  2 year program of studies on Medieval Scriptural Studies, based on the Glossae and Commentaries of that age.
d) Baccalaureatus Sententiarius:  2 year program of studies on the Four Books of Sentences of Master Peter,  taking as its text books, the Commentaria of Saints Thomas Aquinas and Bonaventure of Bagnoregio on the same.
e) Magister Sacrae Doctrinae: 1-2 year specialization program for Doctoral students, seeking to fully grasp the Scholastic method of theological investigation.

In the study of which, the Institute has the following academic objectives:

a) To impart to the student an authentic historical understanding of the authors, language and methods used at the University of Paris, in the mid 13th century.
b) To educate students with profound and complete knowledge of Peter Lombard’s Four Book of Sentences, in Latin and in translation.
c) To give the student a profound and practical experience in the understanding, formulation, crafting and argumentation of the Scholastic Method, as employed by Sts. Thomas Aquinas and Bonaventure of Bagnoregio.
d) To form students and instructors capable of Scholastic argumentation, analysis and research.

The faculty is comprised of full and part-time positions, with a frequency of visiting professorships, to provide a wide and broad exposure to the current research on the topics treated of in this general description of the Institute.

The Institute, the official name of which, in Italian law, is « Studium Scholasticum ONLUS » is organized as a non-profit corporation (ONLUS), all the financial resources received by which go to promoting its academic activities, directly or indirectly. If you would like to financially support us, consider a donation to help defray our operational expenses, or one to help a needy seminarian, religious or priest.